We played this fun and silly Musical Feelings game today using the cards from our Feelings Lapbook. (These printables are available for free.) It was perfect for getting some wiggles out, working on listening skills, and reviewing what we covered this past week.

Here's how you play: 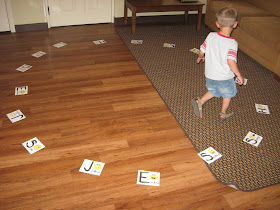 We took the flip book pages out of our Feelings Lapbook and laid them on the floor in a circle. This would probably be more fun done outdoors, but it was far too windy to do that when we played. It didn't matter for the way we played, but you could also put the cards face down. 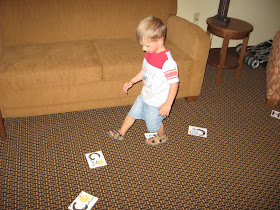 Put on some music and let your child walk, run, hop, jump, or dance from card to card. Dude did all of those things! (after my camera died unfortunately)

Stop the music and have your child FREEZE! Dude and I were both playing, so we both froze.

Then take either the card you're standing on, or the card your child is standing on and (hiding it from their view) make a face or describe a situation involving that feeling and have them try to guess the feeling. If your child is willing and able you could also let them describe the card they're standing on while you try to guess and then you describe the one you're standing on for them. I did all the describing for our game, but Dude often mimicked my faces once he'd figured out the answer. We had so much fun with this! If he couldn't guess it immediately I'd show him the face on the front of the card as a hint.

There were also occasions where Dude gave a good answer, but it just wasn't the one I was looking for. That's OK! We all react differently to situations and I didn't want him to feel like there was a wrong way to feel so I just went with it saying something like: "Yes, some people feel mad when they get pushed down and some other people might feel sad when they get pushed down. How would you feel?" It was actually interesting for me to see just how Dude described his own emotions.

When your child guesses the card you're describing remove that one from the circle, start the music back up, and get moving again!

We had a lot of fun with this game and I could easily see it still being fun as Dude gets older and is able to come up with more of his own situations. It would probably also be a great game for pulling in older siblings to join in the fun!

Thanks for your comments!